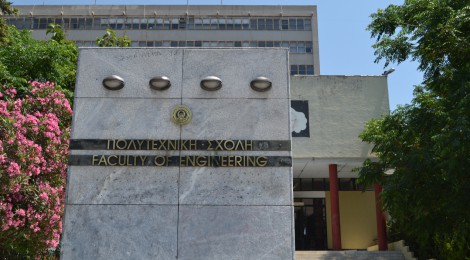 Call for Papers: UNICONFLICTS in spaces of crisis

Critical approaches in, against and beyond the University

The group “Encounters and Conflicts in the City” calls radical research groups, critical workshops and researchers, students and collectives that are placed in, against and beyond the neoliberal university in an open gathering on the 11-14th June 2015 at the Department of Architecture at the Aristotle University of Thessaloniki.
Through this gathering, we aim to create a public space of dialogue transcending divisions among academic and scientific disciplines and to critically approach the urban issues of the era of crisis, through a dialectic, intersectional and postcolonial approach.

The central questions that we wish to raise are two:

1. What is the role of knowledge, of the university and of researchers in the era of crisis?

2. What are the critical epistemological and methodological tools for studying the spatial expressions of the ongoing crisis at multiple scales?

Within this context, we seek to examine the ongoing crisis not just as an over- accumulation crisis but also as a crisis of social disobedience and of the inability of the circulation of capital, patriarchy and nationalism. Moving against the mystification of the crisis, we are interested in critical approaches that focus on the spatialization of social relations and examine the spaces of dissent. Particularly, we wish to examine the articulations, the limits, the contradictions and the dialectic relation of commons, enclosures, inclusion, exclusion, insurgency and counter-insurgency as well as their hybrid intermediate forms, which emerge in and through physical space, modes of communication and the constitution of communities. Overall, we aim to break the North/South or East/West dichotomies and to focus on the fields of gender, race, class and culture.

Hence, we seek to surpass the so called academic activism and to set as a main target of this open gathering the critical examination of the following:

Α. The role of knowledge and of researchers in the university and in social movements
The neoliberal University and the educational system constitute strategic mechanisms for the production and reproduction of social relations. In particular, within a dynamic process of neoliberalization, the university studies are intensified and are linked more and more to the labour market. Within this context, we wish to examine issues such as the production of knowledge, knowledge as a common, the neoliberalization of the University, the new educational enclosures and the concept of Anti-university.

The transformation of knowledge into private property and consequently into a commodity creates new enclosures in the field of knowledge. These new enclosures in neoliberal education are expressed both through the commodification of the physical space of the universities and through the objectification of human abilities. Some indicative examples are the increase of studying costs, the studying loans, the control of access to information, the commercialization of academic papers and books, the securitization of the University space, the criminalization and the rhetoric against student mobilizations, the suppression of the struggles of university employees and the restriction of the freedom of speech.

However, since 1960s and 1970s, the universities are spaces of collective emancipatory movements, of social struggles and of radical experiments of self-organization for the production of knowledge. As a response to these movements, since 1980s, a number of educational reforms has been introduced. These reforms seek to promote the marketization of the university, aiming to produce the appropriate competitive workforce and to supress student movements.

A.1 Social education and emancipatory movements in the universities
– Student movements: limits and contradictions, connection with other urban movements, confrontation of their suppression and criminalization
– Perspectives of a radical pedagogy towards the knowledge as common
– Ideas and practices of free-autonomous universities beyond the education of the neoliberal university

A.2 Control and commodification of knowledge
– Public, state and private education in the neoliberal era
– Politics of knowledge enclosures and copyrights
– The suppression of academic freedom and of the freedom of speech
– Knowledge as private property and commodity for the production of value and surplus value
– Student loans and study costs as mechanisms of disciplining
– The cultural politics of the neoliberal university
– Paid and unpaid work at the University

A.3 The role of the researcher
– Lifelong education, competitiveness and the precarious status of the researcher
– The researcher as producer of dominant discourses and her/his role in the reproduction of power
– Competitiveness, academic carrie and academic divisions and hierarchies
– The biopolitical character of the neoliberal education and the construction of new identities
– Education as praxis, understood as a unity of theory and practice
– Researchers, networks and groups against and beyond the neoliberal university

Β. Critical epistemological and methodological tools for the study of the crisis’s spatial expressions at multiple scales

Against the privatization and commodification of the academic knowledge and the intended hegemony of the neoliberal perspectives, we seek those critical epistemological tools of knowledge production that encourage social emancipation.

During the last years, urban movements and a plethora of visible and invisible practices of resistance and emancipation offer a variety of tools for the destabilization of the dominant ideologies, ways of disaggregation of power, negotiation of contradictions and visibility of differences. In parallel, today there is the urgent need for the promotion, circulation and deepening of these critical perspectives and their linking to social struggles. Thus, we aim to discuss epistemological and methodological tools, such as the following:

B2. Intersectionality and urban space in the era of crisis
How does intersectionality contribute to the study of the urban space? Which are the intersectional crossings of the multiple systems of domination, oppression and discrimination such as race, class, gender, ethnicity, sexuality, religion, dis/ability, age, cast, language, culture, body size, education level or citizenship?

B3. Cultural and postcolonial approaches
How do cultural and postcolonial studies contribute to the understanding of urban space and the conceptualization of body, identity and modes of communication. How does the criminalization and the suppression of alternative modes of culture, information and lifestyle operate as mechanisms of control, disciplining and normalization? What is the role of social media in the communication of social struggles? We seek the expression of the ongoing crisis through the spaces of architecture, art, media, and internet.

Within the above context, we call critical research groups, workshops, collectives and individuals to participate in a gathering during 11-14 June 2015. If you would like to participate, please provide us with your abstract (300 words) by 1 March 2015 at the latest, to the following e-mail:

Participation is free and we will try to provide accommodation for as many participants as possible.